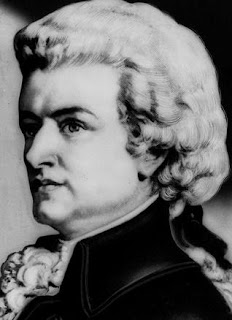 Behind a locked door at the back of St. Ulrich’s Basilica in Augsburg is a small winding staircase which Wolfgang Amadeus Mozart climbed in 1777 to play the 16 century organ. Legend has it the staircase was so narrow, the 21 year-old composer caught a lock of his blond wig on a nail as he squeezed his way up to the loft.
“The curl is now preserved in the church’s vault and is only very rarely seen”, said Johannes Boecker of the Mozart@Augsburg festival.
The story is one tour guides delight in telling visitors to the southern German city. Not only does it underline the composer’s enduring cult, it is also a useful attraction at a time when the city is rediscovering its Mozart roots. Augsburg is even seeking to challenge his birthplace, the Austrian city of Salzburg, for the title of the true ‘Mozart city’, basing its argument on the fact that his father and sole teacher, Leopold, a city native very much shaped by Augsburg’s ideals, had more influence on the success of the world’s most popular composer than any other human being.
“The intellectual and spiritual background which his father absorbed and passed on to Wolfgang made him what he was”, said Josef Mancal, a historian and expert on the Mozarts, particularly Leopold. “The roots of that are to be found in Augsburg, not Salzburg or anywhere else.” Leopold was born the son of a bookbinder in 1719 at a time when Augsburg, unusually for the times, allowed people to choose what religion they practised. He received a Jesuit education that gave him the strategic skills he was able to use to promote his son’s musical talent.


Leopold, himself a composer and violinist, was not only his son’s teacher but also his manager and 18 century equivalent of a PR executive, who coined the term ‘wunderkind’ to advertise his son before their many concert tours across 200 European cities. The ultimate pushy parent, he calculatedly changed his middle name from Gottlieb (loved by God) to the more Italian-sounding Amadeo for trips to Italy.
“Were it not for the intellectual atmosphere, the sense of equality and strategic thinking that Leopold absorbed, the Wolfgang we know is unthinkable”, said Mr. Mancal.
Mr. Mancal argues that the young musician fitted in poorly in Salzburg, due in large part to the rebellious streak inherited from his father and the city’s religious strictness. “He found it smug and suburban, hated the dominance of the church leadership, the strict archbishopric and the social controls — it was like a prison to him”, he said.
Salzburg, though, is having none of it. “Without a doubt he experienced his happiest years in Salzburg”, says one of the city’s cultural figureheads, Carl Philip von Maldeghem, artistic director of the Salzburg State Theatre.
“Augsburg might have been the prelude for his development, but really, Mozart is inconceivable without Salzburg and vice versa. He’s also the main reason people come to Salzburg first and not Augsburg.” But still, argue the Augsburgers, it is high time to acknowledge that it was their city’s free-thinking ways, imparted to Mozart by his father during the first 20 years of his life that shaped the composer’s skills and offered him a sense of liberty that was paramount to shaping his musical personality.
“It was the lack of reverence for authority his father learned in Augsburg and passed on to Wolfgang that led to The Marriage of Figaro”, said Mr. Mancal, referring to Mozart’s opera in which relations between master and servant in 18 century Europe are satirised. “It was also what gave him the sense of entitlement to jump on to Empress Maria Theresa’s lap as a young boy and give her a kiss.” Central to the city’s plans is Mozart@Augsburg, a new annual music festival where some of world’s foremost musicians and Mozart enthusiasts — including pianist Andras Schiff, violinist Daniel Hope and the Emerson String Quartet with 89 year-old pianist Menahem Pressler — will perform in the locations where the Mozarts lived, worshipped and went to school.
“Mozart might have been born in Salzburg, but he was at least as much an Augsburger, because of his family ties and the influence of his father, without whom there wouldn’t have been a Mozart”, says Sebastian Knauer, the festival’s artistic director. “It’s a detail that has been sidelined for too long.”