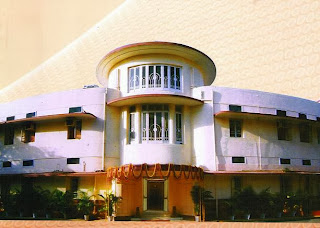 The Union Public Service Commission (UPSC) has released sample questions of the newly introduced paper on Ethics, Integrity and Aptitude for the Civil Services Examination 2013. The sample questions are now available on the website www.upsc.gov.in.
PAPER V - ETHICS, INTEGRITY AND APTITUDE
Candidates may please note that the sample questions below are indicative but not exhaustive. The range and depth of questions that would be asked may differ.

SAMPLE QUESTION NO. 1
What do you understand by ‘ Ethical Human Conduct’? In what way is it important to be ethical along with being professionally competent?

SAMPLE QUESTION NO. 2
What do you understand by the following terms ? Point out their specific relevance in public service;
(i) Intellectual integrity
(ii) Empathy
(iii) Perseverance
(iv) Spirit of service 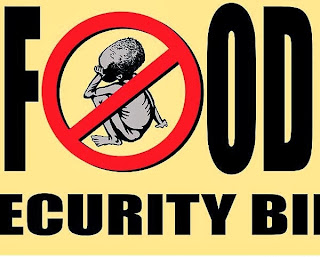 We are working a lot for poor, we have brought in Right to Work, Right to Education and Right to Food for poor. Is this be moment to be proud of because of the poverty, despite of celebrating the 67th Independence Day, we hold our head with shame as we failed to eliminate poverty. India has the highest number of poor people among the BRICS nations. It is the highest number of malnutrition related cases and child mortality. There was never an introspection why there is poverty in India. If the government really wants to do anything for the poor then it must find the reason of that and provide a permanent solution.
Read more »
- October 12, 2013 No comments: 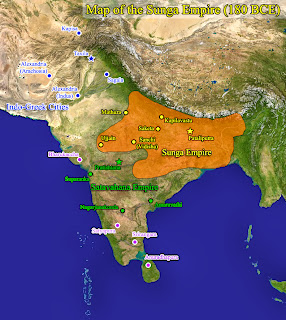 The Sunga rule, extending a little over a century, is in interlude in the history of India. There is nothing extraordinary about the political events associated with the Sungas. The significance of their history, on the other hand, primarily consists in the place they occupy in the social and cultural history of India.
The founder of the dynasty, Pushyamitra Sunga, overthrew the Mauryas; either in 187 B.C. or 184 B.C. After him there were nine other rulers. Among them, Agnimitra, Vasumitra, Bhagvata and Devabhumi were the prominent ones. The names of the first two were associated with some events in political history, whereas the latter two were known for their long rule, they being 32 and 10 years respectively.
There is some controversy about the identity of Pushyamitra Sunga. It was stated in a Sutra that he belonged to a family of teachers. Patanjali claims that he was a brahminor the Bhardwaja gotra. Ivyavadana stated that the Sungas were related to the Mauryas. A Malavikagnimitram refers to them as brahmins belonging to Kashyap gotra.
Read more »
- October 09, 2013 No comments:

After Alexander the Great, the greed seleukidan dynasty of Persia held on to the trans-Indus region. After seleukos Nikator was defeated by Chanragupta Maurya in 303 B.C. the trans-Indus region was transferred to the Mauryas. In mid third century B.C. the seleukidan rule was ended by two peoples. In Iran the parthiar became independent and their sassanians in 226 A.D. In like manner the greeks of Bactria rose in revolt under the leadership of Diodotus. These Greeks were later known as Indo-Greeks when they gained a foot-hold in the Indian sub-continent.
Bactria situated between the Hindu Kush and the oxus, was a fertile region and it controlled the trade routes from Gandhara to the West. The greek settlement in Bactria began in the 5th century B.C. when Persian emperors settled the Greek exiles in that area.
Bactria figured in history with the revolt of diodotus against Antiochus the seleukidan king.
Read more »
- October 05, 2013 No comments: 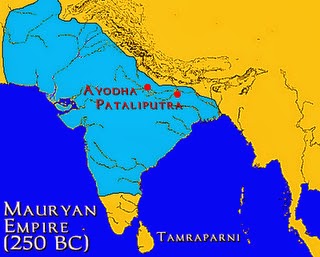 In the post-Mauryan era (200 BC. To 300 A.D.) the economy moved at an accelerated tempo. Society witnessed structural reorientation as significant groups of foreigners penetrated into India and chose to be identified with the rest of the community.
The occupation of craftsmen was an important segement of the day's socio-economic milieu. The craftsment were not only associated with the towns but also villages like Karimnagar in the Telengana region of Andhra Pradesh. The categories of craftsmen who were known in this period bear out the truth that there was considerable specialization in mining and metallurgy. A large number of iron artifacts have been discovered at various excavated sites relating to the Kushan and Satavahans Periods. It is surprising to notice that the Telengana region appears to have made special progress in iron artifacts - not only weapons but also balance rods, sickles, ploughshares, razors and ladels have been found in the Karimnagar and Nalgonda districts. Also, cutlery made out of iron and steel was exported to the Abyssinian ports.
Read more »
- October 02, 2013 No comments:

Ancient History : The splendour of the 'Dark Centuries'

The splendour of the 'Dark Centuries' 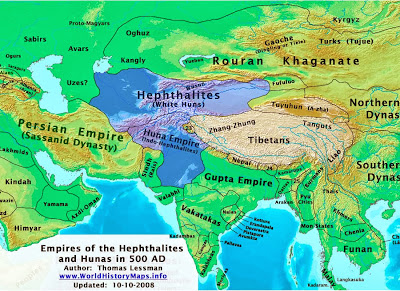 The five centuries which passed between the decline of the first great Indian empire of the Mauryas and the emergence of the great classical empire of the Guptas has often been described as a dark period in Indian history when foreign dynasties fought each other for short-lived and ephemeral supremacy over Northern India. Apart from Kanishka's Indo-Central Asian empire which could claim to be similar in size and importance to has china, the parthians of Persia and to the contemporary Roman empire this period did lack the glamour of large empires. But this 'dark period' particularly the first two centuries AD was a period of intensive economic and cultural contact among the various parts of the Eurasian continent. Indian played a very active role in stimulating these contacts. Buddhism which has been fostered by Indian rulers since the days of Ashoka was greatly aided by the international connections of the Indo-Greeks and the Kushanas and thus rose to prominence in Central Asia. South India was establishing its important links with the West and with Southeast Asia in this period. These links especially those with southeast Asia, proved to be very important for the future course of Asian history.