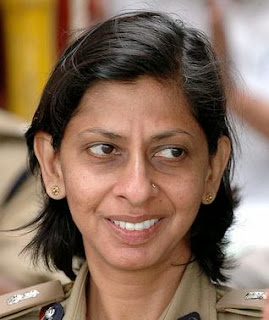 National Police Academy, the Hyderabad-based alma mater for IPS officers in the country, could soon get a woman chief for the first time in its history.
Aruna Bahuguna, a 1979-batch IPS officer, is tipped to be appointed as the new director of the 65-year-old institution, also known as the Sardar Vallabhbhai Patel National Police Academy (SVPNPA), which is tasked with the training of police leaders.
Ms. Bahuguna (56), who belongs to the Andhra Pradesh cadre, is at present posted as the Special Director General in the country’s largest paramilitary force, CRPF, at its headquarters in the national capital.
The orders for Ms. Bahuguna’s appointment as the new director of the academy would be issued soon, sources said.
The officer, who has served in various positions with Andhra Pradesh police, also holds the distinction of being the first woman SDG in CRPF. She is the second-in-command of the 3 lakh strong force, after the DG.
The post of NPA Director fell vacant after incumbent Subhas Goswami was last month appointed as the DG of the Indo-Tibetan Border Police (ITBP).
Read more »
- December 28, 2013 1 comment:

UPSC Advertisement No.20/2013 for various posts

Section 66A of the Information Technology Act

Note: The Information Technology Act, 2000 was amended in 2008. The amended Act which received the assent of the President on February 5, 2009, contains section 66A.
66A. Punishment for sending offensive messages through communication service, etc.
Any person who sends, by means of a computer resource or a communication device,—
(a) any information that is grossly offensive or has menacing character; or
(b) any information which he knows to be false, but for the purpose of causing annoyance, inconvenience, danger, obstruction, insult, injury, criminal intimidation, enmity, hatred or ill will, persistently by making use of such computer resource or a communication device,
(c) any electronic mail or electronic mail message for the purpose of causing annoyance or inconvenience or to deceive or to mislead the addressee or recipient about the origin of such messages,
shall be punishable with imprisonment for a term which may extend to three years and with fine.
Read more »
- December 19, 2013 No comments:

Email ThisBlogThis!Share to TwitterShare to FacebookShare to Pinterest
Labels: Section 66A of the Information Technology Act

UPSC Advertisement No.19/2013 for various posts

Differences between Normal cycle and Arid cycle of Davis.
Differentiate Storm Surges and Seiches.
Uniqueness of fauna in the Notogean realm.
Impact of Pleistocene Ice Age on the crust of the Earth.
Types of endemic plants and their degree of vulnerability to extinction.
Question 2

Answer the following in about 250 words each:

With suitable examples, bring out the impact of local winds on the climate of an area. 20
What are the characteristics that make CHC a serious threat to the ecosystem? Give examples. 15
What is ‘Base level’? Explain the types of base level. 15
Question 3

Answer the following in about 250 words each:

“Offshore Acoustic Study helped the development of the concept of sea floor spreading.” Explain.20
Discuss Dew point and the various forms of condensation. 15
Bring out the relationship between climate and vegetation in the Mountain Biome.15
Question 4 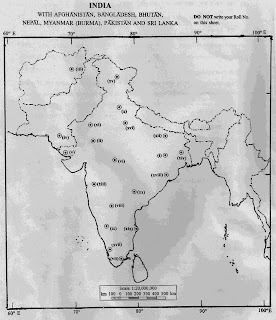