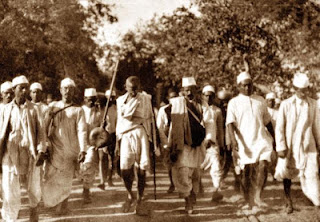 The sudden withdrawal of the non-cooperation movement demoralized the Congress leaders and workers and led to a decline in political activities. But the appointment of the Simon Commission on 8th November 1927 again raised the political temperature. This Commission was constituted to explore the possibility for further constitutional progress in India, but there was not even a single Indian in it. This meant that the British government did not have any faith in the ability of the boycott the proceedings of the Commission. The Congress further decided to protest against it. Strikes and demonstration were held wherever the Commission went. This movement galvanized the country and stirred the youth and created the ground for new all-India movement. In the annual session of the Indian National Congress held in Lahore in 1929, the resolution declaring Poorna Swaraj (complete independence) as the goal was. Ans on 12th March 1930, Gandhi launched the new phase of the national movement.


This new movement, known as the Civil Disobedience Movement, started with the historic Dandi March by Gandhi along with 78 followers. He walked from his Sabarmati Ashram to Dandi, a coastal village in Gujarat and made salt in violation of the law. As making salt was prohibited by the colonial government, Gandhi and those accompanying him were arrested. There were massive protests against his arrest all over the country. Lakhs of people came out on the streets for demonstrations and meetings. There were strikes all over. Shops selling foreign goods were picketed, Khadi and Charkha were encouraged, hundreds of people left their jobs and thousands of students left their schools and colleges. In Bombay, Sholapur and other industrial centers, the workers went on strikes and staged massive demonstrations. In certain areas, the peasants stopped paying taxes.
Seeing the public mood, the British government invited the Congress for a Round Table Conference to talk about the important issues. Despite the opposition of many of Congress leaders and workers, Gandhi agreed to participate and suspended the agitation and signed what is known as the Gandhi-Irwin pact. However, the Round Table Conference failed because the British government did not concede congress’ demands. The Civil Disobedience was started again. But it was not very effective this time as the momentum had decreased. The government heavily repressed the movement. About one lakh of Congress activists were arrested, meetings and demonstrations were banned, nationalist literature was prohibited and nationalist press was suppressed. The Congress withdrew the movement in May 1934.
- September 06, 2013